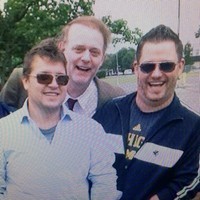 A lot has happened in the recent week regarding Drew and Mike! Drew, Marc and Mike have started a podcast, which they named, “DrewCast.” They’ve posted two episodes (which you can download in the June 2013 section of the audio archive). The guys have no official means to download the episodes, once they do, I’ll make sure to link them in the sidebar. Until then you can get them via the archive or on the front page as they are available.

Drew, Marc and Mike with a special guest. Via Twitter.

Mr. Lane with Marc and Mike are back… kinda…

May 13, 2009 – While Drew was off of the WRIF in 2009, he made a couple appearances on the air in Boston’s WTKK before returning to the Drew and Mike Show. His cohost is none other the Tom, the Killer Kowalski!

I scammed my way on the air as “Jeff in Boston” and asked Drew about coming back to Detroit. The call screener took me off the air brought me back on hold with him and proceeded to yell at me for being a “fucking liar.” He seemed personally offended.

Drew and Mike have a wild phone call with a clueless house kepper named Claira.

Mr. Drew Lane and some of the gang help M.L. Elrick with a story on Rep. Olumba. – Or Download the video directly here.

The guys tease Bentley about taking his girlfriend to see Lady Gaga. Jim’s best line, “There were a lot of homos there.”

Drew, Zip and Mike playing “Who Am I” with Howard Cosell.

Drew and Mike watch the Dateline special, to catch a predator.  Thanks to Don Middleton for the audio!

M.L. Elrick posted this photo with the caption, “What are Drew Lane and the crew from Drew and Mike of 101 WRIF – FM Detroit fame doing hanging out at St. Clare of Montefalco School?Stay tuned to FOX 2 Detroit and find out …”

I was in my car this morning listening to the guys interview Elizabeth Mitchell and I had a guy come up and ask what station Drew and Mike were on now! He was bummed when I told him it was playing through my iPad.

Drew and Mike talk about the Ray and Pete movie and how their part was cut from it.

We updated the Clips section, I’ll be adding the rest this week, but check them out now. Lots of new stuff in there. 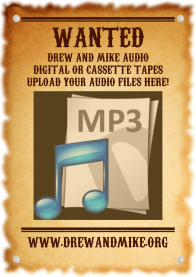